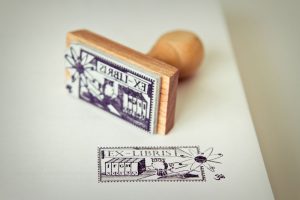 The earliest known marks of ownership of books or documents date from the reign of Amenophis III in Egypt (1391–53 BCE).

However, in their modern form, they evolved from simple inscriptions in books which were common in Europe in the Middle Ages, when various other forms of “librarianship” became widespread (such as the use of class-marks, call-numbers, or shelfmarks). The earliest known examples of printed bookplates are German, and date from the 15th century. One of the best known is a small hand-coloured woodcut representing a shield of arms supported by an angel, which was pasted into books presented to the Carthusian monastery of Buxheim by Brother Hildebrand Brandenburg of Biberach, about the year 1480—the date being fixed by that of the recorded gift. The woodcut, in imitation of similar devices in old manuscripts, is hand-painted. An example of this bookplate can be found in the Farber Archives of Brandeis University. In France the most ancient ex-libris as yet discovered is that of one Jean Bertaud de la Tour-Blanche, the date of which is 1529. Holland comes next with the plate of Anna van der Aa, in 1597; then Italy with one attributed to the year 1622. The earliest known American example is the plain printed label of Stephen Daye, the Massachusetts printer of the Bay Psalm Book, 1642.

A sketch of the history of the bookplate, as a symbolical and decorative print used to mark ownership of books, begins in Germany. The earliest examples known are German, but also they are found in great numbers long before the fashion spread to other countries, and are often of the highest artistic interest. Albrecht Dürer is known to have engraved at least six plates (some quite large) between 1503 and 1516, and to have supplied designs for several others. Notable plates are ascribed to Lucas Cranach and to Hans Holbein, and to the so-called Little Masters (Masters of the small format—the Behams, Virgil Solis, Matthias Zundt, Jost Amman, Saldorfer, Georg Hupschmann and others). The influence of these draughtsmen over the decorative styles of Germany has been felt through subsequent centuries down to the present day, notwithstanding the invasion of successive Italian and French fashions during the 17th and 18th centuries, and the marked effort at originality of composition observable among modern designers. The ornate and elaborate German style does not seem to have affected neighbouring countries; but as it was undoubtedly from Germany that the fashion for ornamental bookplates spread, the history of German ex-libris remains of great interest to all those who are interested in their development.

It was not before the 17th century that printed ex-libris became common in France. Up to that time, the more luxurious habit of blind- or gold-stamping the book’s binding with a personal device had been more widespread: the supralibros. From the middle of the century, however, the ex-libris proper became quite popular; examples of that period are numerous, and, as a rule, very handsome. It may be here pointed out that the term “ex-libris,” used as a substantive (Exlibris (written in one word) in German) found its origin in France.

In many ways the consideration of the English bookplate, in its numerous styles, from the late Elizabethan to the late Victorian period, is particularly interesting. In all its varieties it reflects with great fidelity the prevailing taste in decorative art at different epochs—as bookplates do in all countries. Of English examples, none thus far seems to have been discovered of older date than the gift plate of Sir Nicholas Bacon; for the celebrated, gorgeous, hand-painted armorial device attached to a folio that once belonged to Henry VIII, and now is located in the King’s library, British Museum, does not fall in the category of bookplates in its modern sense. The next is that of Sir Thomas Tresham, dated 1585. Until the last quarter of the 17th century the number of authentic English plates is very limited. Their composition is always remarkably simple, and displays nothing of the German elaborateness. They are as a rule very plainly armorial, and the decoration is usually limited to a symmetrical arrangement of mantling, with an occasional display of palms or wreaths. Soon after the Restoration, however, a bookplate seems to have suddenly become an established accessory to most well-ordered libraries.

The first recorded use of the phrase book plate was in 1791 by John Ireland in Hogarth Illustrated.[citation needed] Bookplates of that period offer very distinctive characteristics. In the simplicity of their heraldic arrangements they recall those of the previous age; but their physiognomy is totally different. In the first place, they invariably display the tincture lines and dots, after the method originally devised in the middle of the century by Petra Sancta, the author of Tesserae Gentilitiae, which by this time had become adopted throughout Europe. In the second, the mantling assumes a much more elaborate appearance—one that irresistibly recalls that of the periwig of the period surrounding the face of the shield. This style was undoubtedly imported from France, but it assumed a character of its own in England.

As a matter of fact, from then until the dawn of the French Revolution, English modes of decoration in bookplates, as in most other chattels, follow at some years’ distance the ruling French taste. The main characteristics of the style which prevailed during the Queen Anne and early Georgian periods are: ornamental frames suggestive of carved oak, a frequent use of fish-scales, trellis or diapered patterns, for the decoration of plain surfaces; and, in the armorial display, a marked reduction in the importance of the mantling. The introduction of the scallop-shell as an almost constant element of ornamentation gives already a foretaste of the Rocaille-Coquille, the so-called Chippendale fashions of the next reign. As a matter of fact, during the middle third of the century this rococo style (of which the Convers plate gives a typical sample) affects the bookplate as universally as all other decorative objects. Its chief element is a fanciful arrangement of scroll and shell work with curveting acanthus-like sprays—an arrangement which in the examples of the best period is generally made asymmetrical in order to give freer scope for a variety of countercurves. Straight or concentric lines and all appearances of flat surface are studiously avoided; the helmet and its symmetrical mantling tends to disappear, and is replaced by the plain crest on a fillet. The earlier examples of this manner are tolerably ponderous and simple. Later, however, the composition becomes exceedingly light and complicated; every conceivable and often incongruous element of decoration is introduced, from cupids to dragons, from flowerets to Chinese pagodas. During the early part of George III.’s reign there is a return to greater sobriety of ornamentation, and a style more truly national, which may be called the urn style, makes its appearance. Bookplates of this period have invariably a physiognomy which at once recalls the decorative manner made popular by architects and designers such as Chambers, the Adams, Josiah Wedgwood, Hepplewhite and Sheraton. The shield shows a plain spade-like outline, manifestly based upon that of the pseudo-classic urn then very alive. The ornamental accessories are symmetrical palms and sprays, wreaths and ribands. The architectural boss is also an important factor. In many plates, indeed, the shield of arms takes quite a subsidiary position by the side of the predominantly architectural urn.

From the beginning of the 19th century, no special style of decoration seems to have established itself. The immense majority of examples display a plain shield of arms with motto on a scroll, and crest on a fillet. At the turn of the 20th century, however, a rapid impetus appears to have been given to the designing of ex-libris; a new era, in fact, had begun for the bookplate, one of great interest.

The main styles of decoration (and these, other data being absent, must always in the case of old examples remain the criteria to date) have already been noticed. It is, however, necessary to point out that certain styles of composition were also prevalent at certain periods. Although the majority of the older plates were armorial, there were always pictorial examples as well, and these are the quasi-totality of modern ones.

Of this kind the best-defined English genre may be recalled: the library interior—a term which explains itself—and book-piles, exemplified by the ex-libris of W. Hewer, Samuel Pepys’s secretary. We have also many portrait-plates, of which, perhaps, the most notable are those of Samuel Pepys himself and of John Gibbs, the architect; allegories, such as were engraved by Hogarth, Bartolozzi, John Pine and George Vertue; landscape-plates, by wood-engravers of the Bewick school, &c. In most of these the armorial element plays but a secondary part.

Bookplates are very often of high interest (and of a value often far greater than the odd volume in which they are found affixed), either as specimens of bygone decorative fashion or as personal relics of well-known people. However the value attached to book plates, otherwise than as an object of purely personal interest, is comparatively modern. The study of and the taste for collecting bookplates hardly date farther back than the year 1860. The first real impetus was given by the appearance of A Guide to the Study of Book-Plates (Ex-Libris), by Lord de Tabley (then the Hon. J. Leicester Warren M.A.) in 1880 (published in London by John Pearson of 46 Pall Mall). This work, highly interesting from many points of view, established what is now accepted as the general classification of styles of British ex-libris: early armorial (i.e., previous to Restoration, exemplified by the Nicholas Bacon plate); Jacobean, a somewhat misleading term, but distinctly understood to include the heavy decorative manner of the Restoration, Queen Anne and early Georgian days (the Lansanor plate is Jacobean); Chippendale (the style above described as rococo, tolerably well represented by the French plate of Convers); wreath and ribbon, belonging to the period described as that of the urn, &c. Since then the literature on the subject has grown considerably. Societies of collectors were founded, first in England in 1891, then in Germany and France, and later in the United States, most of them issuing a journal or archives: The Journal of the Ex-libris Society (London), the Archives de la Société française de collectionneurs d'ex-libris (Paris), both of these monthlies; the Ex-libris Zeitschrift (Berlin), a quarterly. In 1901–1903, the British Museum published the catalog of the 35,000 bookplates collected by Sir Augustus Wollaston Franks (1826–97). Bookplates, of which there are probably far more than a million extant examples worldwide, have become objects of collection. One of the first known English collectors was a Miss Maria Jenkins of Clifton, Bristol, who was active in the field during the second quarter of the 19th century. Her bookplates were later incorporated into the collection of Joseph Jackson Howard. Some collectors attempt to acquire plates of all kinds (for example, the collection of Irene Dwen Andrews Pace, now at Yale University, comprising 250,000 items). Other collectors prefer to concentrate on bookplates in special fields—for example, coats of arms, pictures of ships, erotic plates, chess pieces, legal symbols, scientific instruments, signed plates, proof-plates, dated plates, plates of celebrities, or designs by certain artists.