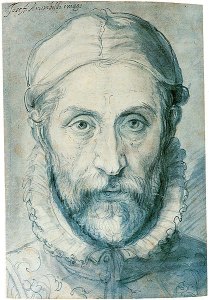 Giuseppe’s father, Biagio Arcimboldo, was an artist of Milan. Like his father, Giuseppe Arcimboldo started his career as a designer for stained glass and frescoes at local cathedrals when he was 21 years old. He also married later on.

In 1562, he became court portraitist to Ferdinand I at the Habsburg court in Vienna, and later, to Maximilian II and his son Rudolf II at the court in Prague. He was also the court decorator and costume designer. Augustus, Elector of Saxony, who visited Vienna in 1570 and 1573, saw Arcimboldo’s work and commissioned a copy of his “The Four Seasons” which incorporates his own monarchic symbols.

Arcimboldo’s conventional work, on traditional religious subjects, has fallen into oblivion, but his portraits of human heads made up of vegetables, plants, fruits, sea creatures and tree roots, were greatly admired by his contemporaries and remain a source of fascination today.

At a distance, his portraits looked like normal human portraits. However, individual objects in each portrait were actually overlapped together to make various anatomical shapes of a human. They were carefully constructed by his imagination. Besides, when he assembled objects in one portrait, he never used random objects. Each object was related by characterization. In the portrait now represented by several copies called The Librarian, Arcimboldo used objects that signified the book culture at that time, such as the curtain that created individual study rooms in a library. The animal tails, which became the beard of the portrait, were used as dusters. By using everyday objects, the portraits were decoration and still-life paintings at the same time. His works showed not only nature and human beings, but also how closely they were related.

After a portrait was released to the public, some scholars, who had a close relationship with the book culture at that time, argued that the portrait ridiculed their scholarship.[citation needed] In fact, Arcimboldo criticized rich people’s misbehavior and showed others what happened at that time through his art. In The Librarian, although the painting looked ridiculous, it criticized some wealthy people who collected books in order to own them, instead of to read them.

Art critics debate whether his paintings were whimsical or the product of a deranged mind. A majority of scholars hold to the view, however, that given the Renaissance fascination with riddles, puzzles, and the bizarre (see, for example, the grotesque heads of Leonardo da Vinci), Arcimboldo, far from being mentally imbalanced, catered to the taste of his times.

Arcimboldo died in Milan, where he had retired after leaving the Prague service. It was during this last phase of his career that he produced the composite portrait of Rudolph II, as well as his self-portrait as the Four Seasons. His Italian contemporaries honored him with poetry and manuscripts celebrating his illustrious career.

When the Swedish army invaded Prague in 1648, during the Thirty Years’ War, many of Arcimboldo’s paintings were taken from Rudolf II’s collection.

His works can be found in Vienna’s Kunsthistorisches Museum and the Habsburg Schloss Ambras in Innsbruck; the Louvre in Paris; as well as in numerous museums in Sweden. In Italy, his work is in Cremona, Brescia, and the Uffizi Gallery in Florence. The Wadsworth Atheneum in Hartford, Connecticut; the Denver Art Museum in Denver, Colorado; the Menil Foundation in Houston, Texas; the Candie Museum in Guernsey and the Real Academia de Bellas Artes de San Fernando in Madrid also own paintings by Arcimboldo. 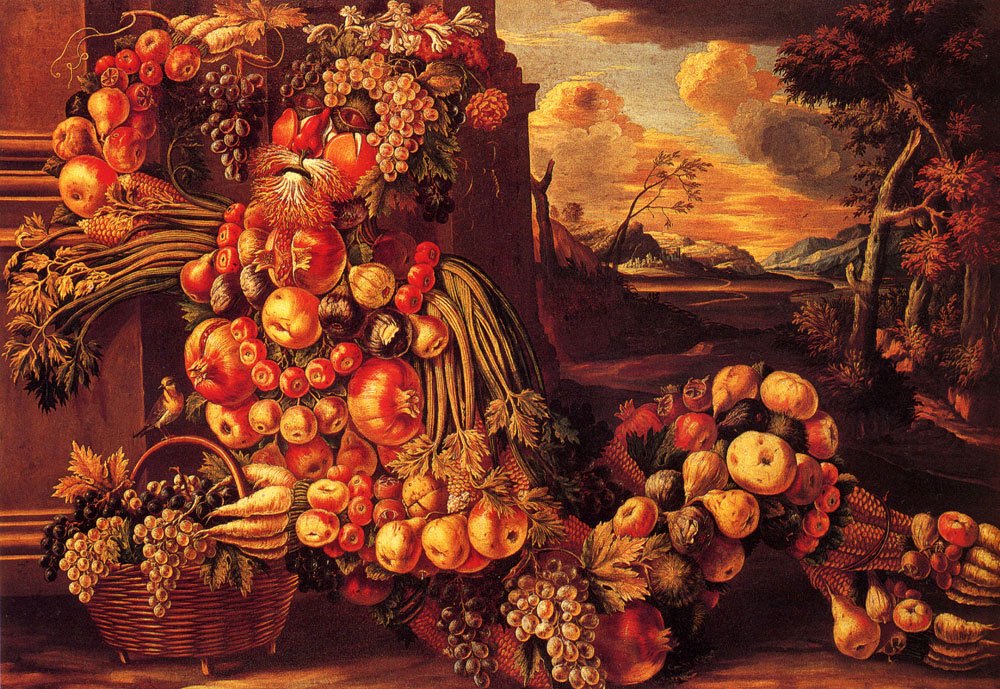